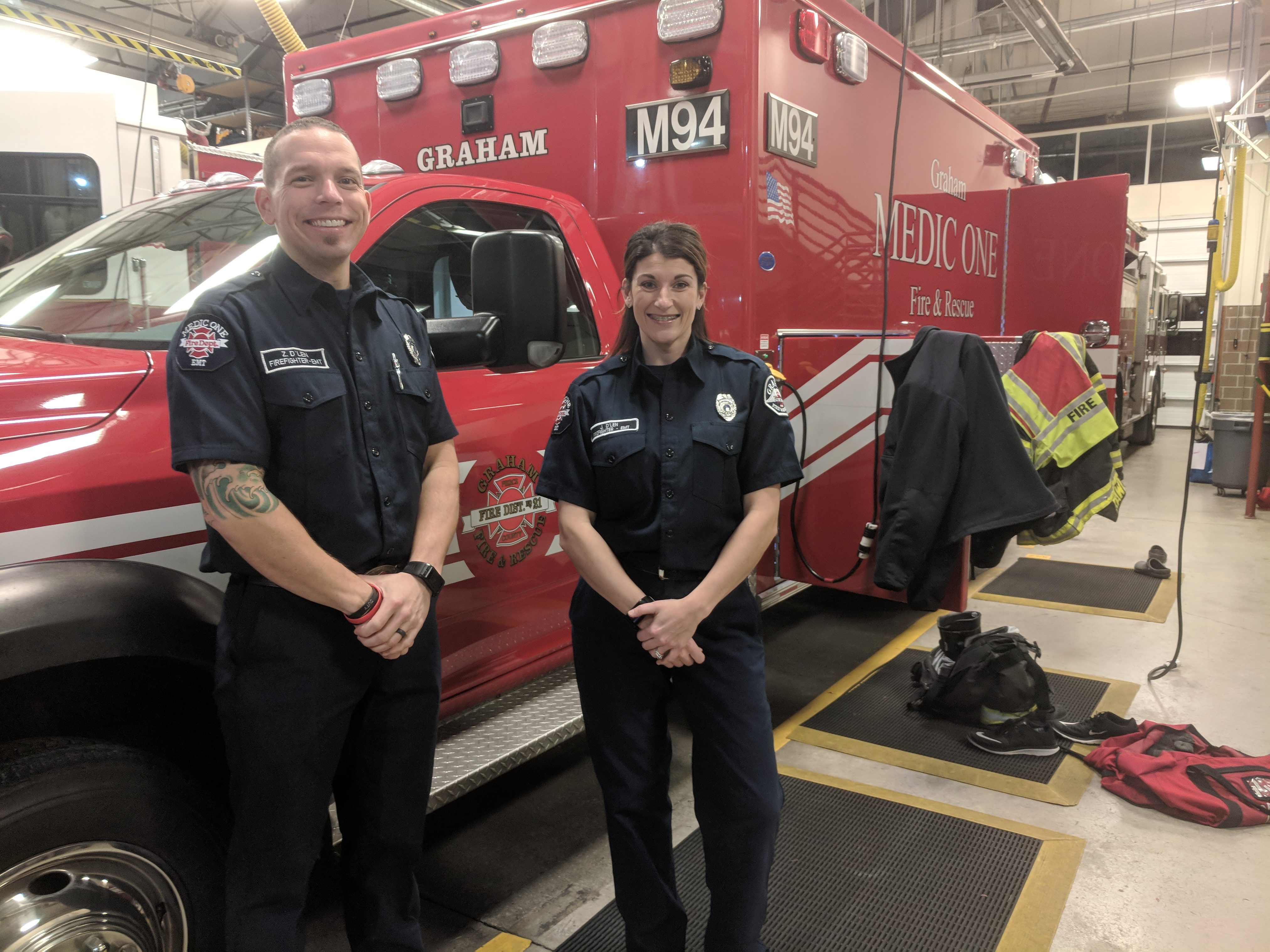 First, if you haven’t guessed, they are married. Second, Lieutenant Jill D’len is the first female promoted in the history of the fire district.

The D’Lens scored in the top two on the recent lieutenant’s exam – although neither will say who secured which spot. What is clear is that this husband and wife duo are committed to each other, their work to save lives and property, and their community.

The D’Lens, who reside in Puyallup, have been married for four years and together for six. Not surprisingly, they met on the job as firefighters. Jill was a resident firefighter at Graham Fire & Rescue when Zac was hired.

Zac had spent five years in the Marines before joining Poulsbo Fire as a volunteer and then North Kitsap as a resident firefighter. His great grandfather was a firefighter in Kalispell, and his grandfather and brother also were in the armed forces. He believes emergency services are a natural choice for military personnel.

“It just seemed like a natural fit,” said Lieutenant Zac D’Len. “I loved serving my country and now I’m serving my community.”

Lieutenant Jill D’Len’s progression to the fire service was more direct. Since middle school she knew this was her career choice after watching the show Emergency from the 1970s.

She had her first ride along with Graham Fire & Rescue when she was in the 9th grade. When she entered high school a year later, she was doing ride alongs with Tacoma Fire. While there, she met a female captain firefighter who changed her life.

“I wanted to be a firefighter, but wasn’t sure I could do it,” said Jill. “But she had done it, and said that I could, too. That meant something to me.”

Specifically, her mentor encouraged her to apply to Camp Blaze, a non-profit organization encouraging leadership skills for girls and women who want to pursue careers in the fire service (https://www.campblazefirecamp.org/). Jill spent a week at the camp running live fire exercises and other rescue related scenarios with professional women firefighters. She returned with new-found confidence, graduated from high school in June of 2004, and started as a resident firefighter with Graham Fire & Rescue in August.

Jill says that the job was intimidating at first. She was just one of a handful of women with 500 men, all of whom were testing for entry level firefighter positions. The position also was physically demanding, but those hurdles were overcome with technique, practice and training.

“Brute strength is not the only thing that matters in this job,” she said. “You have to be able to solve problems multiple ways.”

Her husband agrees. “Jill trains to be physically strong to do the work, but there is so much more to our job than breaking down doors,” said Zac. “She can overcome any challenge presented to her and that’s a mental strength that many don’t have.”

Jill is equally complimentary about her husband. “He thinks I’m tenacious,” she says. “And, I think that he is a true leader. He’s the person you want with you on scene. I admired his leadership abilities long before we were a couple.”

So…just how does this relationship last?

When questioned, Zac is the first to say that he is a better person because of his wife. After that, he asked, “Jill, can you help me here?”

Jill can be heard laughing in the background. She says that they are both passionate about their work protecting their community. In addition, they enjoy the outdoors – skiing and fly fishing – and spending time in Montana where Zac is from and Jill has adopted as her second home.

At this point, the D’Lens want to continue to improve their professional skills and be “boots on the ground” as long as their bodies are able. The community interaction is something that they both relish. As new lieutenants, they plan to continue serving the community and earn the respect of personnel with whom they work.

As a final question, Jill was asked how she felt about being the first female firefighter promoted at Graham Fire & Rescue.

“I realize this is significant for the agency,” said Jill. “I earned it through hard work, and other women and girls can, too. I’m a firefighter and do the same job as everyone else. Through my passion for the job, I would like to be a role model for others and encourage women to pursue this profession.”

Before you think this couple is a superhero duo for their ability to love each other and protect the community? Jill likes grim and gory action movies, which Zac despises. Also, Zac is the chef in the family.  Jill readily admits she thinks the fridge is empty and comes down to an amazing meal he prepared “from nothing,” she says. A reverse-seared Tri Tip steak is one of Zac’s signature dishes.

Jill and Zac would love to hear from young people who are interested in pursuing a career in the fire service. (Or maybe you simply want Zac’s Tri Tip recipe?) Feel free to reach out to Jill (jdlen@grahamfire.org) and Zac (zdlen@grahamfire.org). You will be glad that you did.