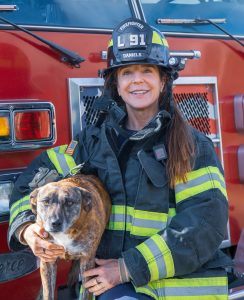 [Graham, WA] — Georgia Daniels began her career as a Firefighter with Graham Fire & Rescue in September of 1995.

Over the past 26 years she has helped thousands of people through their hardest moments, participated in the Puget Sound Pipes & Drums group, built lifelong friendships, and has set an honorable example for females pursuing a career in the fire service.

When she wasn’t working her normal 24 hour shift, Daniels competed in the Scott Firefighter Stairclimb – raising awareness and money for blood related cancers, and challenging herself mentally and physically.

The stairclimb which takes place at the Columbia Center Tower in Seattle, requires firefighters climb 1,356 stairs while wearing approximately 60 pounds of gear and breathing on air.

Daniels participated in her first stairclimb in 1998, running to the top of the tower in 18 minutes and 43 seconds – earning her first title as fastest female.

Daniels continued the trend of being the fastest female through 2007. She took a year off in 2008 to celebrate her 40th birthday and then returned back in 2009 to once again finish as the fastest female. She participated in the climb 5 more times after 2009, earning her 16th title as fastest female in 2018.

“The first few years I participated because it was fun. It was really enjoyable to see old friends each year,” said Daniels. “At some level I really enjoyed the terrible and tremendous amount of training I would do. It gave me an outlet to relieve daily stress.”

Daniels fastest time was in 2013 in which she finished climbing all 69 floors in just 14 minutes and 22 seconds.

“The men got all the glory,” stated Daniels. “One year I went to the pub where everyone would hang out afterwards. A group of firefighters saw I had on a Graham Fire & Rescue shirt and asked me if I knew who Georgia Daniels was. I told them that was me! They were floored that I was so little and girlie looking.”

Overcoming adversity was a significant part of Daniels career. There weren’t many female firefighters in the industry, and she had to learn how to navigate how females where viewed in a male dominated profession.

Daniels is proud of how far the fire service as come.

“I wish I was able to start my career over knowing what I know now in addition to the general acceptance that females are a crucial and deserving part of the fire service environment,” added Daniels.

When asked what advice she would give other females pursuing a career in the fire service, Daniels responded with “be true to yourself and don’t be afraid to ask for help. Everyone has strengths and weaknesses, which is why we work as a crew. All of our individual skills combine together to create one strong unit.”