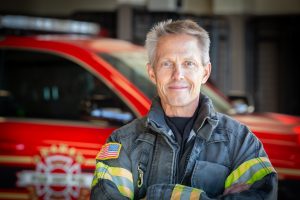 [Graham, WA] — Graham Fire & Rescue Fire Chief Pat Dale retires after 40 years in the fire service. Dale has served the Graham community since 2017, and plans to continue teaching Fire Ground Command and firefighting techniques nationally and internationally, from a new home base in Arizona.

Dale began his career as a volunteer Firefighter for the Tumwater Fire Department in 1980. He landed his first career firefighter position with the Kent Fire Department, now known as Puget Sound Regional Fire Authority, in 1982 and worked his way through the ranks to Battalion Chief. In 1998, he joined the Olympia Fire Department (OFD) and served 16 years as the Assistant Fire Chief and Director of Training. After retiring from OFD in 2015, Chief Dale was hired to serve as the Fire Service Instructional Program Manager at Bates Technical College. In 2017, he was recruited into the position as Fire Chief at Graham Fire & Rescue.

“In his short time at Graham Fire & Rescue, Chief Dale has made long lasting impacts that will positively affect the department and the community for years to come” stated Graham Fire & Rescue Board of Commissioners Chair Bob Homan. “His leadership style has created an environment where the employees thrive and enjoy coming to work.”

Dale has contributed more to the firefighters and citizens of Graham Fire & Rescue in the past 5 years than can be listed here. A few of his many accomplishments include:

Dale has a passion for teaching and is highly invested in firefighter safety. This is demonstrated through his creation of the Change Conference, which provides an opportunity for firefighters from around Washington State to gather and listen to nationally recognized speakers regarding mental health, firefighter cancer awareness, and safety.

Dale has left a lasting impact on those he has work with. When asked to describe his leadership style, his former colleagues said the following:

“He is someone that knows how to bring people together. He fights for what he believes in, he fights for his people, and he believes in getting things done,” stated former L726 District Vice President Jasper Stenstrom. “That’s the kind of leadership our organization needed.”

“Pat Dale was my first Lieutenant in the fire service,” added Retired Kent Firefighter Beth Gallup. “We worked hard and had fun. He was always competitive and looking for new ways to do things – faster, safer and more effective.”

“Pat Dale was a mentor and good friend to me throughout my entire career. He was the perfect balance between tradition and innovation – respecting the tradition of the fire service and the agency he was working for, while simultaneously moving his agencies forward in the most innovative ways,” said Retired Olympia Fire Captain Jim Brown. “He is a relational person by nature and he uses that talent to bring people together, solve problems, and celebrate successes. Pat is the kind of leader the fire service needs more of.”

Through hard work, team-building, strategic planning, and leadership development, Dale has plotted a new course for Graham Fire & Rescue. He has successfully led the department to his goal of organizational excellence and created an energized work atmosphere. His knowledge, compassion, and innovative leadership will be greatly missed.

Current Deputy Chief, Oscar Espinosa, has been selected to serve as the next Fire Chief of Graham Fire & Rescue.