Espinosa Selected to take the Reins of Graham Fire & Rescue 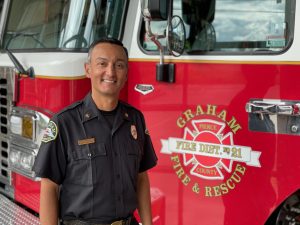 [Graham, WA] — On Wednesday, June 9, 2021, the Graham Fire & Rescue Board of Fire Commissioners unanimously selected Oscar Espinosa as the District’s next Fire Chief.

Espinosa is a 25-year member of the fire service. Beginning his career as a volunteer firefighter for Graham Fire & Rescue in 1996 after serving in the United States Army. Espinosa moved up within the District over the years, having served as a Firefighter, Lieutenant, Captain, Battalion Chief, Assistant Chief, and for the past 4 years, as the Deputy Chief of Operations.

Espinosa has a Master of Business Administration and a Master of Science in Leadership from Grand Canyon University, and has completed many executive level research and leadership courses through the National Fire Academy.

“Chief Espinosa has dedicated his entire career to Graham Fire & Rescue,” said Commission Chair Bob Homan “he has worked up the ranks and has done an incredible amount in preparation for the position of Fire Chief. He is a well-respected member of the fire service in Pierce County and throughout the region. The Board is confident that Chief Espinosa will continue the current progress and direction the District is going at present.”

A panel consisting of representatives from the Board of Fire Commissioners, IAFF Local 726, administrative staff, and the public evaluated Chief Espinosa’s knowledge, skills and abilities to perform the duties of Fire Chief. The panel submitted their recommendation to the Board, and the Board unanimously accepted the recommendation to promote Oscar Espinosa to the position of Fire Chief.